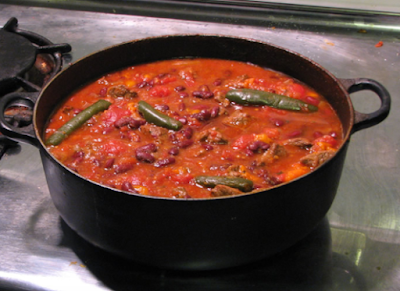 Chili con carne (Spanish pronunciation: [ˈtʃili koŋ ˈkaɾne];[1] English: chili with meat), commonly known in American English as simply "chili", is a spicy stew containing chili peppers, meat (usually beef), and often tomatoes and beans. Other seasonings may include garlic, onions, and cumin. Geographic and personal tastes involve different types of meat and ingredients. Recipes provoke disputes among aficionados, some of whom insist that the word "chili" applies only to the basic dish, without beans and tomatoes. Chili con carne is a frequent dish for cook-offs and is used as an ingredient in other dishes.

In Spanish, the word chile from the Nahuatl "chīlli" refers to a "chili pepper", and carne is Spanish for "meat".
As far back as 1850, a recipe consisting of dried beef, suet, dried chili peppers and salt, which were pounded together, formed into bricks and left to dry, which could then be boiled in pots on the trail, was found.
The San Antonio Chili Stand, in operation at the 1893 Columbian Exposition in Chicago, helped popularize chili by allowing Americans to appreciate its taste. San Antonio was a tourist destination and helped Texas-style chili con carne spread throughout the South and West. Chili con carne is the official dish of the U.S. state of Texas as designated by the House Concurrent Resolution Number 18 of the 65th Texas Legislature during its regular session in 1977.

GOT ANY KAHLUA ?
aka
The BIG LEBOWSKI COOKBOOK

Before World War II, hundreds of small, family-run chili parlors (also known as "chili joints") could be found throughout Texas and other states, particularly those in which émigré Texans had made new homes. Each establishment usually had a claim to some kind of secret recipe.
As early as 1904, chili parlors were opening outside of Texas. After working at the Louisiana Purchase Exposition, Charles Taylor opened a chili parlor in Carlinville, Illinois, serving "Mexican Chili".[5] In the 1920s and 1930s chains of diner-style "chili parlors" grew up in the Midwest.
Cincinnati chili arguably represents the most vibrant continuation of the chili parlor tradition, with dozens of restaurants offering this style throughout the Cincinnati area. It can be traced back to at least 1922, when the original Empress Chili location opened.
In Green Bay, Wisconsin, the chili parlor Chili John's has existed since 1913. As with Cincinnati chili, it is most commonly served over spaghetti with oyster crackers, but the recipe is less sweet with a higher proportion of fat. The original proprietor's son opened a second location in Burbank in 1946, which is also still in existence.
Until the late 2000s, a chili parlor dating to 1904, O.T. Hodge, continued to operate in St. Louis. It featured a chili-topped dish called a "slinger": two cheeseburger patties, hash browns, and two eggs, and smothered in chili. As of 2014 no O.T. Hodge-branded locations remain, though one still exists under the name Chili Mac's. 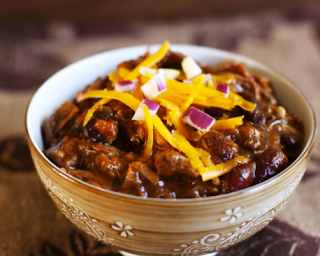 Beans, a staple of Tex-Mex cuisine, have been associated with chili as far back as the early 20th century. The question of whether beans "belong" in chili has been a matter of contention among chili cooks for a long time. While it is generally accepted that the earliest chilis did not include beans, proponents of their inclusion contend that chili with beans has a long enough history so as to not be considered "unauthentic".[12] The Chili Appreciation Society International specified in 1999 that, among other things, cooks are forbidden to include beans in the preparation of chili for official competition—nor are they allowed to marinate any meats.[13] Small red or pink common beans are commonly used for chili, as are black-eyed peas, kidney beans, great northern beans, or navy beans.
Most commercially prepared canned chili includes beans. Commercial chili prepared without beans is usually called "chili no beans" in the United States. Some U.S. manufacturers, notably Bush Brothers and Company and Eden Organic, also sell canned precooked beans (without meat) that are labeled "chili beans"; these beans are intended for consumers to add to a chili recipe and are often sold with spices added.

Tomatoes are another ingredient on which opinions differ. Wick Fowler, north Texas newspaperman and inventor of "Two-Alarm Chili" (which he later marketed as a "kit" of spices), insisted on adding tomato sauce to his chili — one 15-oz. can per three pounds of meat. He also believed that chili should never be eaten freshly cooked but refrigerated overnight to seal in the flavor. Matt Weinstock, a Los Angeles newspaper columnist, once remarked that Fowler's chili "was reputed to open eighteen sinus cavities unknown to the medical profession." 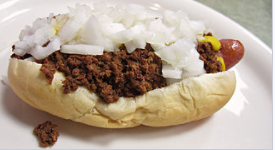 RECIPE in The BIG LEBOWSKI COOKBOOK

Chili dog is the generic name for a hot dog served in a bun and topped with some sort of meat sauce, such as chili con carne. Often other toppings are also added, such as cheese, onions, and mustard. The style has multiple regional variations in the United States, many calling for specific and unique sauce ingredients, types of hot dogs, or types of buns and referred to regionally under region-specific names. 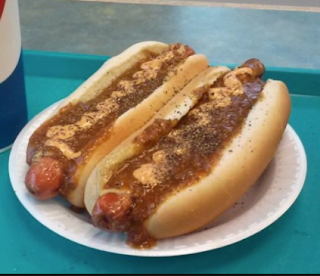 See also: Texas Tommy (hot dog)
In New Jersey and Pennsylvania, the "Texas hot dog,", "Texas chili dog." "Texas hot'," or "Texas wiener" is a hot dog with chili or hot sauce; it is served in variations with assorted condiments. The Texas wiener was created in Paterson, New Jersey, before 1920 and in Altoona, Pennsylvania, by Peter "George" Koufougeorgas in 1918 and originally called Texas Hot Wieners. The "Texas" reference is to the chili sauce used on the dogs, which actually has a stronger Greek cuisine influence due to the ethnicity of the cooks who invented it. It is considered a unique regional hot dog style. From its origins, the invention spread to the Pennsylvania cities of Scranton and Philadelphia. 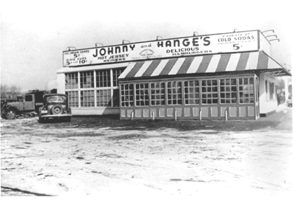 In southeastern Michigan, a Coney Island hot dog is a European-style Frankfurter Würstel (Vienna sausage) of German origin with a natural lamb or sheep casing, topped with a beef heart-based sauce, which was developed by Greek immigrants in the area. It has several local variations, including Detroit style, Flint style, and Jackson style. 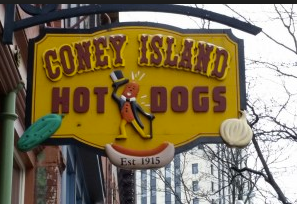 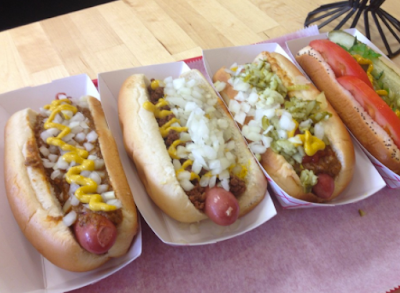 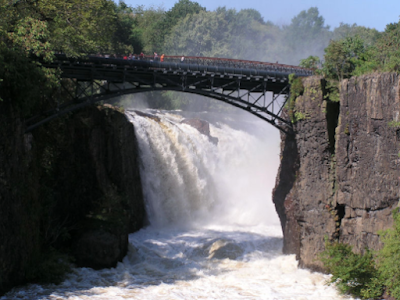 "See the FALLS, get a TEXAS WEINER 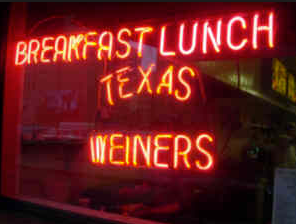 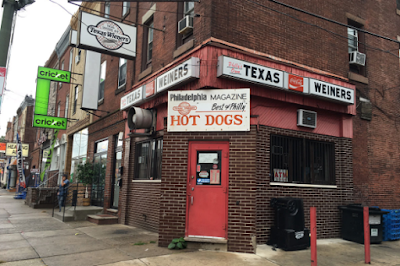 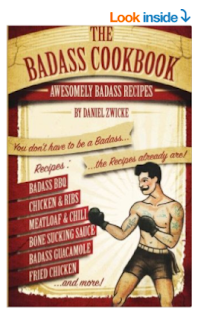 CHILI For a CROWD